Why Same-Sex Marriage Law In U.S. Matters To Nepalese


Glad to see overwhelming participation of people from across the world changing their Facebook profile pic to "rainbow-filtered" in response to LGBTpride celebration.

That's an awesome overloaded.  But, there were people as well, who didn't like the way people from Nepal going gaga about the law from U.S.  For an instance, they seem so right.  "After all, it's in U.S., why go gaga in Nepal?!  There are bigger things to worry and be concerned."  However, we beg to disagree.

This is not only in this case.  We heard same kind of response from certain fraction of people, when Nepalese people protest against Yulin meat festival -- based on the same argument.  "Why people here are bothered about what's happening in other countries?"

So, here is my attempt to address all those wonders and doubts.


Nepal is a country but Nepalese are no more just a people bound to live only in Nepal.  Though, today they are living in Nepal, next year they might be living in U.S.  Also, there are many Nepalese living in U.S.  Among these people, some maybe from LGBT communities or maybe a children or siblings or cousins belonging to those communities and thus, Same-Sex Marriage Law in U.S. matters to them.  All these gays and lesbians and bisexuals and transgenders from Nepal maybe hoping one day to settle in U.S. and thus the law matters to them.

Welcome to globalised world.  Not all Nepalese are going to live in Nepal forever.  Thus, anything happens in Japan or China or U.S. or India, equally should matter to Nepalese because we simply are from globalised world and not a communal world anymore.

Reason 2:  Netizens are not just a citizen of a country:


Let's talk about Nepal.  Nepal in reality is drastically different from Nepal on Facebook.  This very same people on Facebook may not behave in same manner in reality due to various factors.  Memes on Internet may not be funny in ground, the kind of language they speak ain't same in day-to-day life. Basically, modern internet users are citizen in offline world and a Netizen in online.  When they are citizen, they behave per local norms but when online, they behave per online norms.  Online community is a virtual society that is as influencing and powerful as offline world.  Human psychology works in same manner on Internet as it works in ground.

Hate it or love it, you cannot anymore act like how you act in your local streets, when you are on Internet.  Law of adaptation is real, both in online and offline world.  So, when a Nepalese behave like global citizens and you don't understand why, problem is not with them.  Problem is with you for not understanding Netizen world, the Internet culture and the norms.


Concept of humanity, equality, love and compassion for all, have been growing so aggressively and rapidly, but some people from this part of world are not seeing that, because they are still lost in their small world where people are divided and discriminated and judged, based on a race and ethnicity and religion.  However, modern youths and netizens and global mindsets don't indulge or think in that narrow-minded people's way, or at least not when on Facebook.  Consciously and subconsciously, they have embraced the idea of "humanity first."  Pain of human from Palestine, to them, is same as someone from next door, unlike old generation who goes with the attitude of "who cares, what happens in Palestine."

Thus, when a gay or lesbian or bisexual or transgender are given justice, it's a matter of pride and celebration for all humans and not just American because from the eyes of rational global minds, it's not anymore about Americans, it's all about HUMAN and HUMANITY.


Like it or not, that's the fact.  You are reading this article via Internet invented by U.S., that came to you via Facebook, from U.S., reading on a blogsite by Google, that too from U.S. and language? Call it British or American, but the style is American-influenced.  So, basically at least the Internet world and the media and the modern lifestyle is pretty Americanized.  To me, not only lifestyle, even the economy of U.S. defines the economy of the world.  Same with geopolitical agendas.  Love or Hate U.S., but this is the fact.  Sooner one realises, better the understanding of modern world and easy to predict future world.

With the legalisation of same-sex marriage, U.S. media and leaderships are not anymore in awkward position to create awareness and push the homosexuality agendas across the planet.  Nepal, India, Pakistan, China and Korea, these all are from the same planet.  Those countries that deny the rights to LGBT are no more in comfortable position to keep resisting to grant basic human rights for LGBT community, because U.S. and liberals won't let them resisting for long.

As said above, this shall make LGBT issue more widely embraced and addressed and being in a globalised world, positive effects in any regard matter to all global citizens and Nepalese are GLOBAL CITIZENS and not NORTH KOREANS.


So, come out from your communal world and communal mindset, and you see there is a beautiful global society rising, where Humanity is the mantra, culture is modernity, thinking is rational, and science the religion.  It might not be perfect but is far from imperfect, where at least people won't be discriminated and/or judged based on something that they don't have control over.

Some Nepalese already know these and that's why they go gaga about, as a modern youth, but, some are still living in communal world and thus don't understand why everyone is going gaga about.

It's not hard, just give a try and you will agree with rest of our kinds that Same-Sex Marriage Law in U.S. indeed should matter to Nepalese for all the reasons stated above.

Thank You Facebook for coming up with such a wonderful idea that succeeded to bring together all global citizens and help them show their solidarity with rational humans from all walks of life.

Me and Kaagmandu Magazine team would like to share this moment of joy with all the mind alike out there celebrating #LGBTpride. 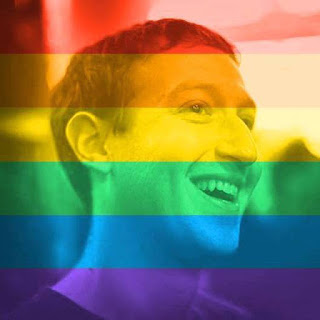