A,B,C,D about Constitution & Its Essence


Look! Constitution fever is everywhere in Nepal and amongst all Nepalese around the world.  Proud to be in this historical moment -- something like 1787s moment of U.S., 1950s moment of India.

However, many here seem not fundamentally aware about, "what is constitution and why it is so important" and how it makes difference in our lives and all, so this is my attempt to give you fundamental understanding all you need to know about Constitution.

Before understanding constitution, we should understand Human in first place.  We humans though carry mobile, drive cars, live in concrete house, we are fundamentally no different from Monkeys in 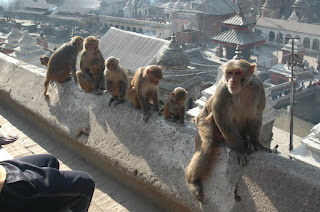 Pashupatinath area or Gorilla from Congo National Park when it comes to core social behaviour.  We all are social animal that behave and function within the norms of a group they belong to.  In every group of monkeys or gorilla, there is a "Dedu Badar" and rest of monkeys function and behave according to his expectations.  Same with the human society. We all have that "Dedu Badar."  In ancient days, they used to be called tribal leader; in middle age, were called kings; likewise, "Mukhiya ba" in village and in modern days, political leaders/politicians.  There is always a leader (dedu badar) to lead rest of the humans, who sets laws and norms and values and principles based on which a society or country functions and people behave.

In short, human society always behaves and functions according to laws set by "Dedu Badar," and humans follow those rules and do things, that's why humans are also called "Sheep."  This is an inherited character of humans and will never change.

So, there we are now clear on core nature of human.  Now, let's understand how laws and norms and values and principles are set by "Dedu Badar."

There are various factors involved to decide right from wrong, but most of the time, it's the perspective of "Dedu Badar" that he personally thinks is the right thing for the rest to follow, secondly aspiration of rest of people in a group; third is, opinions of sub-leaders and vocal members of society, plus other minor factors.  There are two kinds of "Dedu Badar," who enforce rules to rest of the members.

Now, we are clear about how laws and rules are made in society.  Country is a bigger form of society, so fundamentally, it functions in the same manner.

But, now here is the catch.  Human doesn't live forever.  We all die, so the "Dedu Badar."  Today, we may have good "Dedu Badar," but who knows next "Dedu Badar" is the bad one, the Hitler one.  Or, today a society functioning in one particular norms, may have to function with different norms because the new "Dedu Badar" didn't like the earlier norms.  Society is not an underwear that you keep changing every now and then.  This creates instability, lack of identity, lack of bonding among social members, and no confidence among social members to plan out things for a long-term gain, and thus society functions with short-term mentality, selfish attitude, accumulate gains and profits as much as one can and quietly transfer it to the society where there is certainty.  Now, you know why Nepal or any unstable country is the way it is.  Therefore, to create a stable country, no matter who the"Dedu Badar" is in governing position, there should be continuity of original ideas and norms and concept on which a country was born.  New Dedu Badars are to govern a country per those original ideas and aspirations based on which a country was formed.

There comes the need of constitution for that to happen.

Constitution is basically a concept on how a particular society (country) should behave and function.  Let's take U.S. as an example.  U.S. the land of opportunity, liberty and equality; all men are equal; freedom of speech and right to pursue happiness and wealth; above the religion; rule of laws , etc are the fundamental philosophy/ideology based on which U.S. country was created.  This fundamental philosophy/ideology is what constitution represents.  Now to protect these fundamental aspiration of a constitution, power centres are created in a system, a comprehensive framework.  Best constitution are those who have got a good check and balance and highly rational.  U.S. Constitution is considered to be the best constitution, and most of the constitutions around the world were highly influenced/inspired by the U.S. constitution for that matter.

So, now constitution is created which defines the values and norms and how to perpetuate the ideas and give continuity to it forever.  "Dedu Badar" comes and goes, but country's identity and core philosophies should remain same.  "Dedu Badar," if tries to impose laws and norms to people and exploit the system per his wish, check and balance system stops him from doing so.  200 years since the birth, U.S. has remained intact, always, because Founding Fathers of U.S. constitution were very visionary and succeeded to create an institution that is nearly impossible to hijack by any dictators (other minor factors are there too though).


Constitution is a foundation of a country, based on which country makes laws and enacts acts and regulations, that all members of a country follow and behave and function accordingly.  For example, when constitution says, "All Citizens are equal, regardless of gender or creed or race or caste," no political parties or "dedu badar" can create any laws in the future that would discriminate any gender or race or caste in the future.  If he tries to, constitution has created a power centre to tackle.  That is Judiciary, who will say "Stop the bullshit, you are not allowed as per constitution."  You see? That's the beauty of good constitution, which Nepal was lacking all this time, reason why, every 10-20 years, a smart/cunning "Dedu Badar" used to exploit the system.

This time, everyone is trying to work for strong constitution like that of U.S., which 100s of years from now also shall remain as it is, preserving the core values and ideas and brings stability in Nepal, so that every Nepalese can engage living their lives as it pleases them.  Also, government and people can plan their work for 10-20 and 100 years time horizon.  All this time, due to instability, everyone of us where focused on short-term gain because long-term plan never would work here.

That is all about constitution and the essence of constitution.  We all die, but Nepal shall remain as we created, as we wanted, so that our children and grandchildren can live confidently, plan their lives without fearing change in system, without fearing hijacking of system, and living with identity based on ideas and concepts perpetuated by constitution and not only Mount Everest, Buddha, and Hindu and MoMo -- New Nepal redefined by New Constitution for the eternity. 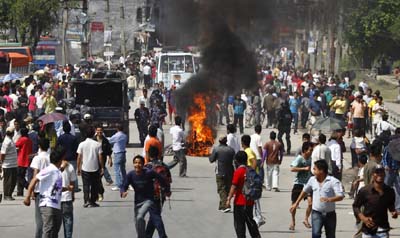