I have heard a lot about you from media and Internet, about your loyalty and sincerity, work ethics and professionalism.  Also, I have learned about your initiation on "Bagmati Cleaning Project,", and many other good deeds of yours, and all these have made me to believe, you are the right person from GON to reach out to express my plain yet honest wishes and thoughts regarding the ongoing "Rebuild Nepal" aspiration and potential directions, which I think need to be explored and plan accordingly before everything turn into a mess and a failure, and this letter is an attempt to share my perspectives which I believe, needs to be given due consideration, if not in totality, at least the sentiment.

About me, I am just like any other modern optimistic youths from Nepal, who believe that with the shift in tectonic plates, country has shifted towards a right track, provided we all act wisely and promptly.  I am the person that stood by government aftermath of earthquake and also through my earlier blogs, I had requested many to keep patience and stand by government and help government in whatsoever manner.  It's not because I do trust my government without a cold feet, but because I have to trust my government, especially in such tragic mode, because to me government is an institution that has to be respected and have faith upon, just like judiciary body.  Unlike others, I don't synonymize government with politicians and their parties.  For me, government is a cake, and politicians are egg, an important factor but not "Must Have" factor.  Khimlaal administration is the proof.  However, democracy is a cake with egg, thus politicians and their parties cannot not be ignored.  Moreover, like many others, I too don't have good views towards the political structures of Nepal and their respective leaders, although, unlike others, I don't label them as "bad."  To me, most of them are just incompetent bunch of people, who pose no required skills nor adequate knowledge nor wisdom to set visions.

That's a brief introduction of self and my current perspectives on government and politicians.

Coming to main aspect of this open letter.  Chief, I am afraid "rebuilding Nepal" is getting highly politicised and thus we are heading towards making of Haiti and not Hiroshima and Nagasaki.

Soon after the earthquake, political parties were quiet and maintained that quietness for some weeks.  It was right thing.  I too had appreciated them.  Suddenly, news have started surfacing about "which party gonna put what numbers of volunteers on ground."  Every party seems creating their own battalion of volunteers, which may look a right thing in a surface, but in long-term, it ain't so right.

I tell you why.

1.  Political parties are born for politics with a mission to govern.  Make no mistake, everything they do in the name of people will eventually be linked to their political profile.  In this case, though today, they are in different villages and places volunteering quietly, this act will be used to capitalise for political benefits in the future.  When volunteering is driven by the desire to capitalise, it is same as feeding a poor to enslave in future.

2.  Their volunteering is more like political investment.  I am not surprised on why Gorkha was chosen by Maoist volunteers or Nuwakot by Congress.  It must be because it's their vote base.  Volunteering in true sense should not discriminate but when political parties take in-charge of volunteering, there comes discriminations.  We already have heard couple of  complaints about relief distribution, that is mainly due to vote base orientation.

3.  Volunteering becomes show-off biz.  "Congress appointing this thousands of volunteers."  "Maoist building this numbers of houses."  "Ten thousands of volunteers to be mobilised by UML."  This all may sound great, but in reality, it is just a reflection of unhealthy political competition, which eventually may create chaos and clash between these forces driven by mission to please voters and capitalise.  Thus, volunteering when is guided by selfishness and hidden agendas, end result is generally unpleasant.

4.  They got mostly unskilled volunteers.  We all know what kinds are constituted in parties and what kind of people march around waving their party flags.  To me, they by no means capable to rebuild nation, unless building a bamboo house (hut) and distributing noodles is all about "Rebuilding Nation."

5.  Money and political parties are not to be put in same bucket.  Rebuilding nation comes with billions of budget and political parties know it.  Today, though party activists as volunteers are mobilised by parties on their own expense, this cannot go like this forever.  Soon, there will be budgeting for each villages and towns, and the same political parties and their party workers will be the man-in-the-gate to decide who gets the money, how much to get, how to spend, and how to use it.  Maybe, they won't misuse it.  That's not what am talking about.  My concern is, money in the hand of incompetent volunteers and team is as waste as garbage, but then since these political parties are already establishing their battalion all across the places, once the budget come into play, no one can ignore them nor they will let anyone to ignore them.  We have ample examples from past.

6.  Political parties and their hegemony on rise.  Above all, this scares hell out of me.  Political parties are in best position to reclaim their power and influence and importance.  Soon schools and colleges will reopen, office and business will resume, people will get back to their usual business.  Who will be left in the rubble is politically mobilised volunteers and victims.  What else is needed to impress and deceive people failing to thrive?

Sorry, if I sound very negativistic about politicians and their supporters.  It's not that I am negative about them.  They too are Nepalese, they too love this country, they too want to see this country prosper.  I have no doubt about that.  My concern is, given their past behaviours, kind of volunteers they have, and kind of incompetent leadership they pose, I doubt that they alone are capable to build modern Nepal from rubble, because rebuilding Nepal in  the year 2015 demands, knowledge, skills, understanding of technology, best global practice, that comes with better education, better exposure, which by no means our political parties and their workers got.   Who got it then? Educated, independent, globally exposed intellects and skilled manpower.  We have Harvard and Princeton alumni in mood to contribute to rebuild the nation.  KU and TU goldmedalist ready to cancel their Visa process and stay back for country.  People with required experiences and skills both from in and out of the nation, are ready to help and guide in this rebuilding process.  However, this intellect force is not ready to collaborate with political force.


Thus, there is a immediate need for someone to step up to lead the intellect force and also lead the political force and the best and only viable option to lead both of them is the Government Of Nepal.


As I said earlier, people often interchange politicians with ministers and parties with government, but in reality, government is a very broad and complex body.  It's an institution.  It functions per the law and constitution of country and stay accessible for all.  Many don't know that government is not run by politicians alone.  This is the time to define and establish the truth that Government is an institution that runs in conjunction with all political and independent forces where national interest and prosperity are core objectives, and right now, our core objective is to rebuild nation and for this, we need people from all walks of life ready to contribute and sacrifice, and not just UML, Congress, and Maoist workers, and this is only possible if they all are kept and led under one brand, "National Volunteers."

Chief, this is the core purpose of this letter.  As I see no one from political parties initiating or talking about National Volunteers, which is probably due to the above-stated reasons, I thought of you.  I remembered how successfully you have initiated the "Bagmati Cleaning Project."  I remembered the news about how well you handled and facilitated Dr. KC's hunger strike.  I remembered all those articles and Facebook status praising your virtuousness and humbleness and your effective administration.  Image and influence that you have established among political parties and bureaucrats and required networks that you have, collectively gave me a hope, that the most appropriate person that can initiate and convince everyone in creating something like National Volunteers led by government of Nepal is Chief Sec. Leela Mani Paudyal.

Creating a National Volunteer body led by government is the need of hour.  People, youth and old, men and women, everyone is ready to be part of the body in making of New Nepal.  They don't need money, they don't want cars and quarters.  They just want a reliable body, above the political parties, above the NGO and INGO, and that can only be Government.

Hope you got my points and hope, I will soon hear the announcement in regard to that.  Hope political parties and their respective leaders too concur with me and act quick before we turn into another Haiti, and not Hiroshima and Nagasaki.

United we stand, divided we fall. 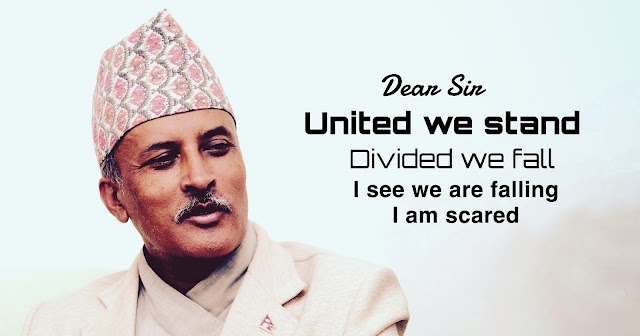