"Hinduism" Is BullShlt. Shut Up and Listen. (Part 1)


Hinduism, this one word lately has been quite dearing to Nepalese and even amongst Indians since BJP came into power.  Nepalese, because of ongoing constitution making process and BJP since they are fundamentally right wing.  That’s all natural thing bound to happen in any society; agendas swing between progressivists and traditionalists and this conflict leads society to next level — a simple evolutionary process.  Nothing wrong, nothing bad.  However, evolution does not always mean better than earlier version.  If conflicts are won by ignorance and regressive forces, society may evolve in backward fashion, which I am afraid this part of world is heading towards if we don’t sort out fundamental aspects of religion and inform people about the truth as it is and let them to decide hence accordingly.  So, this is my attempt to give you simple understanding on what really "Hinduism" is and you decide how the "Hinduism" agenda should be carried forward.

Before all, please clean your head filled with preconceived ideas and state of denial.  You are reading one of the best things in your life.  Read word by word and understand the truth as it is.

Let's begin this way.  Do you people really know what "Hinduism" really is??  I laugh when 20 something tries giving a big lecture on Hinduism whereas they clearly are talking about “suneko Kura” and internet shit here and there.  You don't think so? You think you know Hinduism? Let me ask you this, when was the term “Hinduism” came into mainstream world? 1000 years or more than that? You know Hinduism is just 100 years old concept?  Yes! 100 years old concept.


" The term Hinduism was introduced into the English language in the 19th century to denote the religious, philosophical, and cultural traditions native to India.”

Wait, have an ear to listen.  I am not done yet.  Hinduism is an english term and the english term came into picture only after British colonisation.  Make sense? I am not saying hindu culture and tradition was born 100 years back.  All I am saying is "Hinduism" concept was born a hundred years back.  Did you notice -ism there? which means it’s a set of values and rules and norms and thus a kind of ideology.  Do you think Hinduism is ideology like communism or socialism or some shitism? Translate Hinduism into Nepali language.  It's Hindubaad.  Do you think "Hinduism" is a baad.  No right? That’s why I say, Hinduism term itself is wrong term to represent Hindu people in totality as it is and putting everyone in one basket and calling "Hinduism" a religion is bullshit.  It’s an comprehensive knowledge outlined by Englishman to give a comprehensive understanding on Indian subcontinental culture and tradition or to be more precise, Sindhu valley civilisation.

To put it in simple perspective, these English men came to India, searched and observed around, put together all the values and norms and cultures and traditions, tried to bring together all the pieces of puzzles scattered around here in Sindhu Valley Civilisation and gave the name to this whole understanding of this part of world as "HINDUS AND HINDUISM."


Did you notice -ism there?
which means it’s a set of values and rules and norms
and thus a kind of ideology.
Do you think Hinduism is ideology

Yes, that's what the "Hinduism" in true sense is.  It's an collective understanding perpetuated by English people, based on their own research and interpretation backed by their own critical analysis and reasoning.  Something like you see in Nat Geo and Discovery, scientists going around Sahara Desert and trying to interpret early civilisation.

Keep following.  As I claim earlier, you are reading the best thing on Internet.  Next post, I will tell you how Hinduism was born, what really Hinduism is, good and bad about hinduism and above all, why you should not go butthurt whenever someone points absurdness in Hinduism.  Trust me, I know and have understood Hinduism 100 times better than you.  Just have ears to listen. 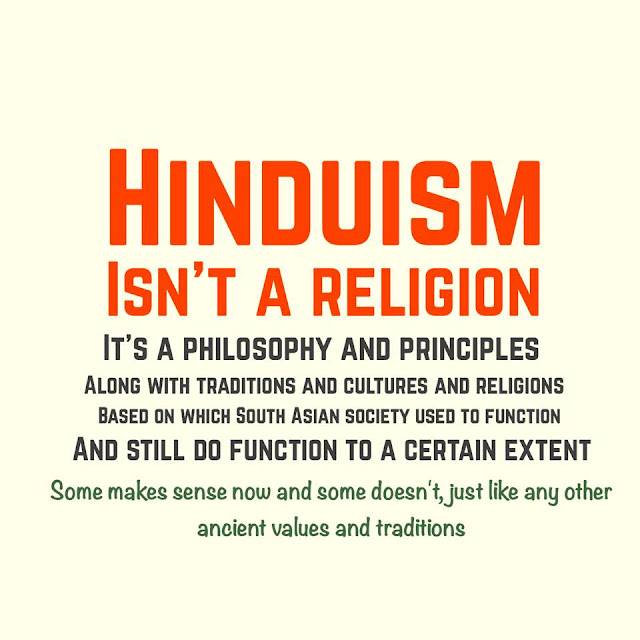