Unspoken Truth Behind The Rush For New Constitution

One massive earthquake tremor and all politicians glued together like frightened chickens, and then they came up with the idea of proceeding further with constitution-making at whatever cost and put an end to decade-long saga as soon as possible.

Have you noticed lately that Mr. Prachanda is very quiet and been staying out from media? Dr. Baburam's tone and language is very neutral.  Congress and UML leaders are acting wise and saint; almost everyone is good to each other - no satire, no provocation, no stubbornness.  Here they go, they have now signed the 16-point pacts without consulting Indian and U.S. ambassadors.  This is very unusual in Nepali politics.  Earthquake must have given them enlightenment and turned 601 into Buddha.  Or maybe not.  To me, the hidden truth is, cleaning the mess which they had created, which made them and us stuck in vicious circle with no certainty on end to it, without compromising, which their ego-centric politics were stoping them from and boom! Earthquake turned out to be a great excuse. Sigh.

Yes! For sure, all Nepalese politicians have quietly acknowledged that they are stuck in vicious cycle with no way out or end to it if remains adamant on ideologies and dreams and thus, giving Earthquake and National need as an excuse, they came up with the plan to introduce a new constitution but leaving lots of room for amendments in the future.  They will not admit it publicly but their squeezed face and trembling tones are the hint that they are tired of running in the circle and had enough of it and want a peace of mind as death is around the corner for them.

So, now ball is in our court.  Shall we go "Khucching" or press the restart button and begin everything as a new start with whatever we are left with, forgiving everyone and moving ahead with positive mind and optimism?  This constitution is wrong on too many levels.  It lacks attachment of people like that of U.S., it lacks sense of victory like that of India and China, it lacks sense of justice like that of South Africa, but then there are many countries that lacked all needed sentiments towards constitution but overtime they did well, and we too can do well.  I believe so.


Don't take me wrong.  I too have kinda bad opinions about Nepalese politicians just like many of you, but I don't think they don't love this country.  Just like you and me, they too love this country.  But, just like many of you, they too totally lack basic wisdom and knowledge needed to demand for change, act for change.  Nepalese politicians turned out to be "dogs chasing a car."  They got the car and they went clueless.  Ignorance has ruined them and country, just like ruined many lives, many of our houses.  Now, what shall we do? Do we have options? or shall we keep slamming these dogs? or shall we give them a chance?  This is very dangerous situation we are right now in, and if this uncertainty prolonged, Nepal may lose it's identity.  So, let's be pragmatic and ask ourself what is the right option,


a.  Keep fighting for better constitution forever (?)
b.  Settle down with whatever these politicians have finally agreed upon.


I repeat again, the proposed constitution is not at all the perfect one, is wrong on so many levels, but good thing about it is, this constitution is open for amendments and probably kept so for a reason (doing the basic thing now pending the rest for the future).  Even the best constitution of U.S., by most wisest men on Earth then, has been amended 27 times so far, so let's not indulge too much into fighting/demanding for better provisions.  Kids born during "Janaandolan" have started going school, those in school, have started going college, those in college got married and have kids; waiting for constitution, elders have left the world.  How long to keep this mess around, when we know 100% consensus will never come in the country like Nepal??  So, there is no happy ending to it.  More the time we take, more the challenges, more the opportunists, more the absurd agendas come into picture, making things more and more complicated, and eventually just like Sikkimese, we may give up.  It's easy to say, we won't but trust me human psychology works in a very weird way -- once had enough, they give up everything for a peace of mind and security.  We are no different.

So all the medias, politicians, youths, my request to you all -- let the constitution come in whatever form.  Let's not fight on this anymore.  I am sure politicians have realised their weakness, quietly have admitted their failure, and have grown up enough to do the right thing.  If not, we know what we need to do.  I am very confident that we can build this nation on our own.  I am very confident our modern generations cannot be fooled like these politicians did to earlier generation.  Look around the social media, look around the youths in streets and colleges.  I am so hopeful things have changed very much in our favour that if these politicians mess again with our country and people, we will march towards Singhadurbar like Egyptian youths, drag them out of the Singhadurbar and throw them to another side of Sunauli border.  WE CAN DO THAT and WE WILL DO.

We will march towards Singhadurbar
like Egyptian youths,
drag them out of the Singhadurbar and
throw them to another side of Sunauli border


So, Let's not spread negativity, pessimism, conflicts and chaos.  Politicians will not come to us and say sorry but we know they are feeling sorry and all this rush for New Constitution is the unspoken truth behind the New Constitution.  Let's silently forgive them, pretend we didn't get it, just to look for new beginning with the New Constitution. 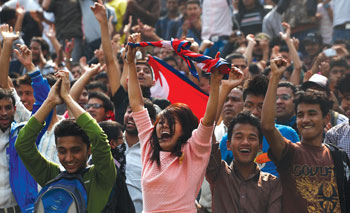